Cigar Etiquette for Beginners: How to Smoke a Cigar Like a Pro 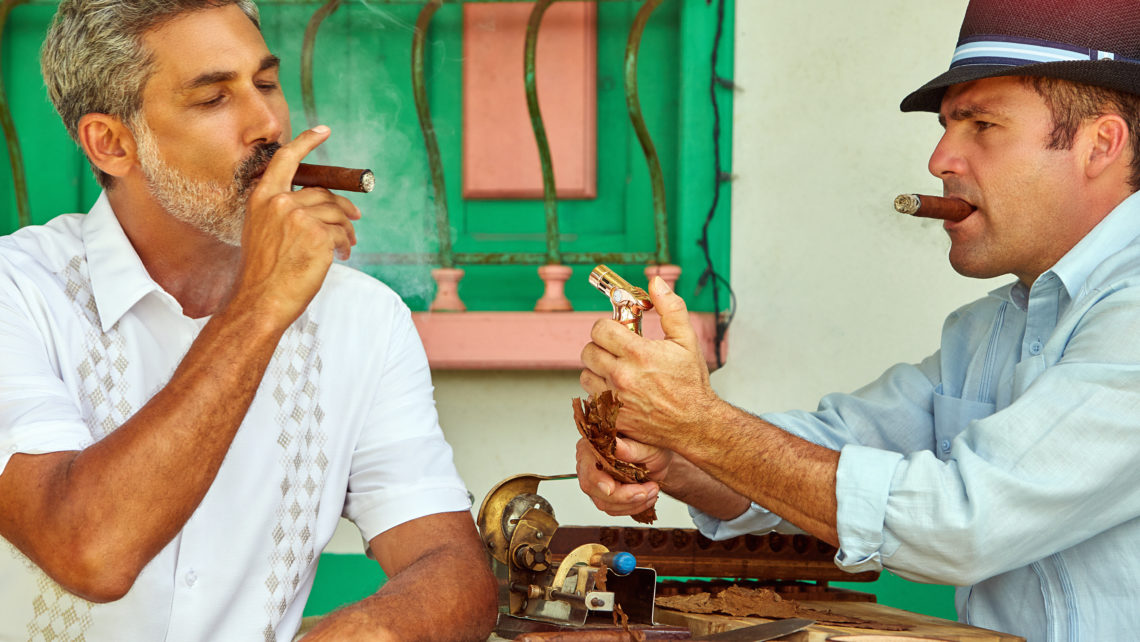 Good cigar etiquette sounds like a simple thing but it can make a difference to those around you.

Smoking a cigar seems pretty straightforward. Light one end and then take a puff on the other. However, cigar smoking isn’t that easy. If it’s your first time smoking a cigar, you need to be acquainted with a few norms that cigar smokers and aficionados follow. While it’s not strictly frowned upon to circumvent these conventions, keeping these tips in mind will help you avoid looking like a compete beginner when the lovers of the leaf start lighting up their cigars.

A bad cut can ruin even the best cigars so it is important to snip your cigar the right way to avoid having a less-than-stellar smoking experience. The best way to learn the fine art of cutting a cigar is by observing how experts do it.

If you’re lucky enough to attend a wedding or a corporate event with a cigar rolling activity booth, notice how cigar rollers cut the cigar. Typically, they will clip the cigar’s end in a fast and firm motion to prevent tears and snags. Another important point to remember is that the smaller the cut, the stronger the experience is. Cigar cutting tools come in different types, including straight cutters, wedge cutters, and shuriken cutters. However, if you’re in a pinch, the caveman way also works – but, be careful enough to locate where the neck ends and then bite off.

Just like in cutting, you have many options in lighting up a cigar. A torch lighter works best but you can also use matches or a normal cigarette lighter. No matter what lighting option you choose, warm the foot of the cigar first before you start puffing on it. Spin the cigar around to get an even burn. Once you see an orange glow, you’re ready to go.

Once the tip is primed and ready, put the cigar in your mouth and start puffing. Puff your cigar two or three times and blow out the smoke. Do this until your cigar produces thick, white smoke. At this point, your cigar is sufficiently lit so constant puffing is unnecessary. Pro-tip: Never inhale the smoke as you’ll end up coughing it out.

The most common way to hold a cigar is by placing it between your index finger and thumb. Never hold it like you would a cigarette. A cigar, obviously, comes in a bigger size than a normal cigarette, so if you hold it in between your index and middle fingers, you would probably drop it. Another thing that you should never do is to hold the cigar in your mouth. If you do this, you’ll just end up wasting tobacco. So, after taking a puff, take the cigar away from your mouth, then hold it in a resting position or place it on your ashtray.

Put it Out Responsibly

When you’re finished, don’t stub out the cigar like you would a cigarette because it will only release unpleasant odors. Instead, lay it down on the ash tray, let it die a dignified death and your nose will thank you.

Create a unique experience for guests, whether you’re organizing a corporate event, trade show, or a wedding. At Cigar Stud, our team of cigar rollers and baristas will bring in a wealth of knowledge and experience in a fun and interactive setting.

To know more about our services, contact us here.